Ryan George Burrows was 7 years old when he tragically died suddenly in 2003. He attended Banks Lane School in Stockport and is sadly missed by both his family and the school’s community.

Following his death and thanks to funds donated by parents, the school created a special place to remember Ryan which included a lovely cherry tree and tree seat.

This place is extra special to Ryan’s family because one of the school's amazing teaching assistants used to sit there with Ryan's brother Tom (who was 5 years old in Reception at the time), to talk to him and make sure he was okay during a very sad and challenging time.

Ryan's sister Jenny, started at Banks Lane Nursery the year after Ryan died, so the area was important to her knowing that her brother was remembered at the school. Ryan's father Christopher has also been instrumental in ensuring Ryan will never be forgotten and holds the place close to his heart. 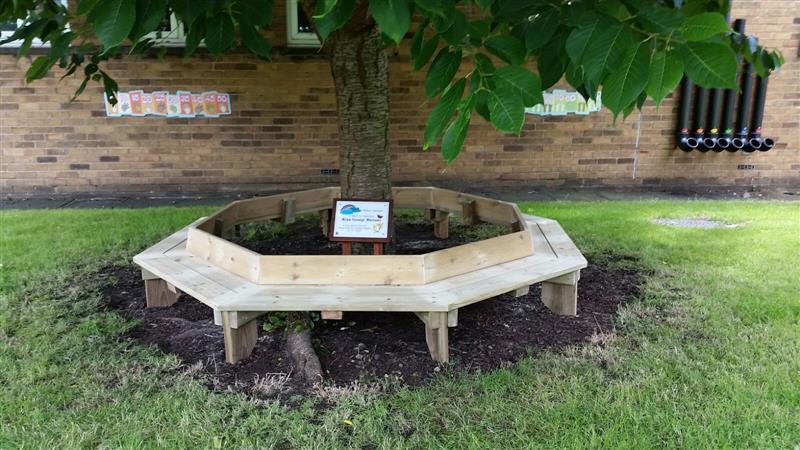 Unfortunately, over the years the tree roots began to break up the path until eventually damaging and breaking the seat itself.

We decided to restore the area for the family and installed a new Tree Seat to ensure that the memory of Ryan George lived on at the school.

Ryan’s Mother, Katherine Burrows had this to say:

“The kindness shown to us by Nathan and Michael has given our special place back its meaning, it was given in kindness and compassion at the very worst time of our lives and has been restored to us in the same spirit 13 years later.”

“We will never forget it.”

We are proud to have helped restore this special place for Ryan’s family and hope it continues to be a great area for children to reflect, socialise and relax in during school time.