The Benefits of Nursery Rhymes to your Child's Development

World Nursery Rhyme week is a global initiative that promotes the importance of nursery rhymes in early childhood development.

Each year, since 2013, Early Years practitioners share five rhymes over the course of a week and encourage children to participate. This year the event runs from the 15th to the 19th of November.

I’ve always believed that there is something really special about nursery rhymes. I find it fascinating that rhymes such as ‘Hey Diddle Diddle’ have been enjoyed for centuries. 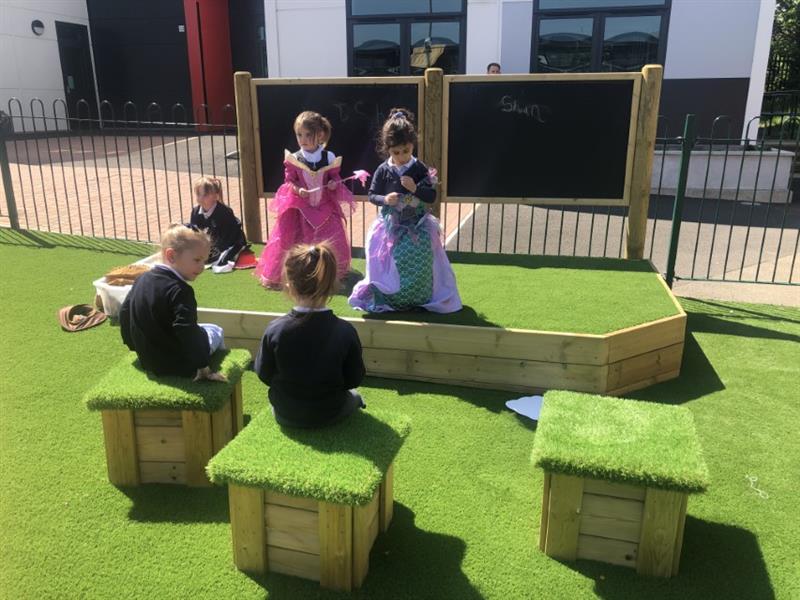 Often favourite rhymes are passed down by word of mouth through generations of families. Baby and toddler faces seem to light up when hearing a familiar tune and watching or performing actions.

When I had my own children, I soon discovered a collection of songs and rhymes that I seemed to store in my subconscious memory.

I love the fact that poetry can be drawn upon at any time with young children, you don’t need a wealth of resources or books to engage a whole class of five-year-olds! 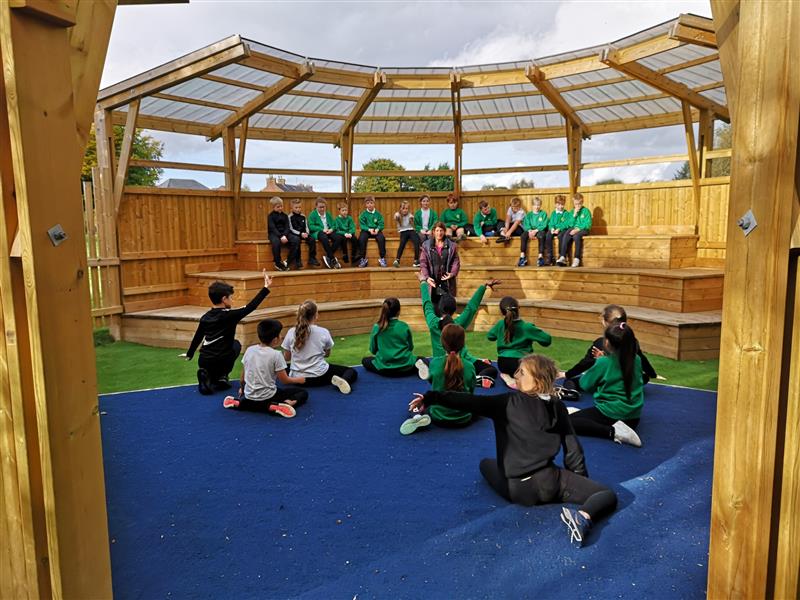 Familiar nursery rhymes can bring a sense of togetherness to a group of children, linking home to school and creating a class team.

As well as keeping children happy and entertained, teaching young children rhymes is an important step in their development.

Even before they can speak, babies start hearing nursery rhymes, particularly lullabies to soothe them to sleep. Singing can have a calming effect on babies, helping them to regulate emotions.

Nursery rhymes feature repetition and natural rhythm which research claims babies respond to, as they spend nine months with a non-stop rhythmical heartbeat.

Singing encourages the expression of language and nursery rhymes offer a set of new, sometimes complex. vocabulary that we don’t often use in everyday speech.

Children are exposed to a wider variety of words which helps to enrich their vocabulary. If reading rhymes from a text, words can be pointed out and meaning discussed.

Nursery rhymes such as ‘Jack and Jill’ contain a beginning, middle and an ending, therefore introducing pupils to story composition. As they progress, children will be able to extend rhymes into stories and create their own versions. 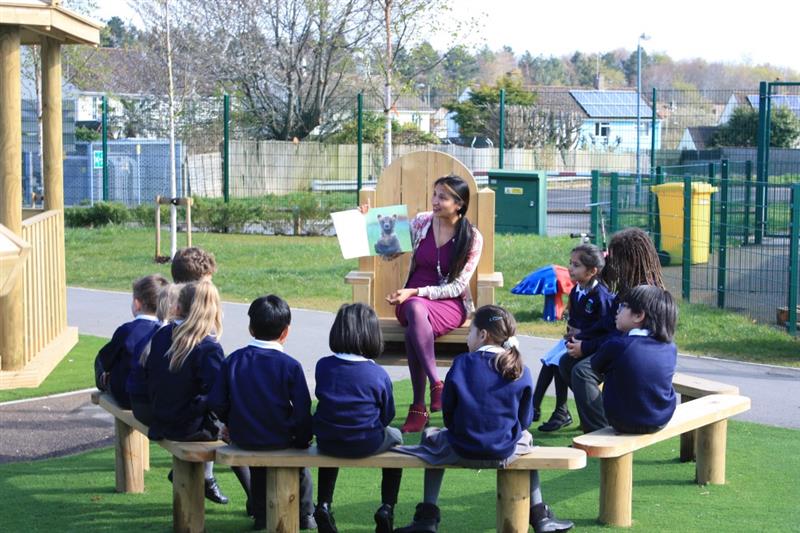 Research has shown that children who can rhyme become proficient readers. Reciting and singing rhymes to each other helps to develop phonemic awareness.

Rhymes help children to develop auditory skills, as they listen, they discriminate between sounds. Repetition can help children to identify phonemes within words and understand syllable patterns.

Pupils will begin to recognise words that don’t rhyme, they will anticipate missing words at the end of a phrase and begin to create rhyming strings such as: ‘pop, top, clop, flop.’

When children recite rhymes, they are learning to articulate words, modulate their voices and enunciate clearly.

Pupils develop their mouth and tongue muscles by saying different sounds in a rhyme, which is important when starting to read and learning how to pronounce letter sounds.

Singing nursery rhymes is often pupils first steps into oral storytelling and reciting poetry which will be built upon as they progress through school.

Not only do nursery rhymes introduce language skills such as identifying rhythm and alliteration they can also be used to teach mathematical concepts.

Children love singing and number songs can be used to support the teaching of counting, addition and subtraction. 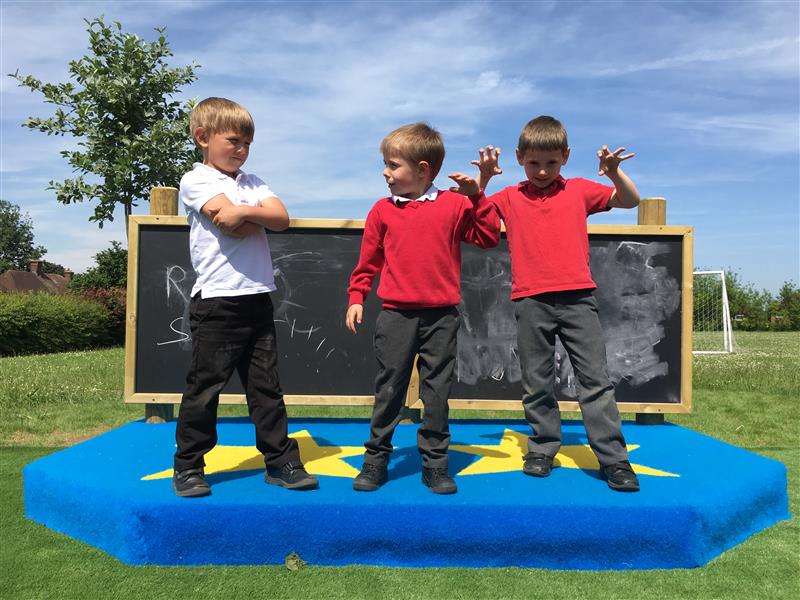 Simple subtraction is introduced as the buns are taken away and positional language and shapes are mentioned, ‘round, on top.’

Also, money is exchanged in return for the buns which opens up possibilities for teaching money in a practical context.

Rhymes that involve finger counting show children that fingers can represent numbers. When children are holding up their finger and counting on them these patterns help to support mathematical predictions and reasoning skills. Using fingers when counting improves coordination and fine motor skills.

Rhymes and songs provide ideal starting points for dramatic performances. Children love to act out rhymes as they say them. They can use their whole bodies or hands and fingers to dramatize the actions of the characters.

Social interaction is developed when rhymes and songs are performed in peer groups. Facial expressions are shared, eye contact is made and bonds are formed when practising much loved chants.

Having an Outdoor Performance Stage for children to showcase their rhymes to others develops self-esteem, communication and language skills.

They could be making their own hot cross buns to sell in the mud kitchen, putting the kettle on for Polly in the home corner or experimenting with different ways of coming down the tunnel hill just like Jack and Jill did! 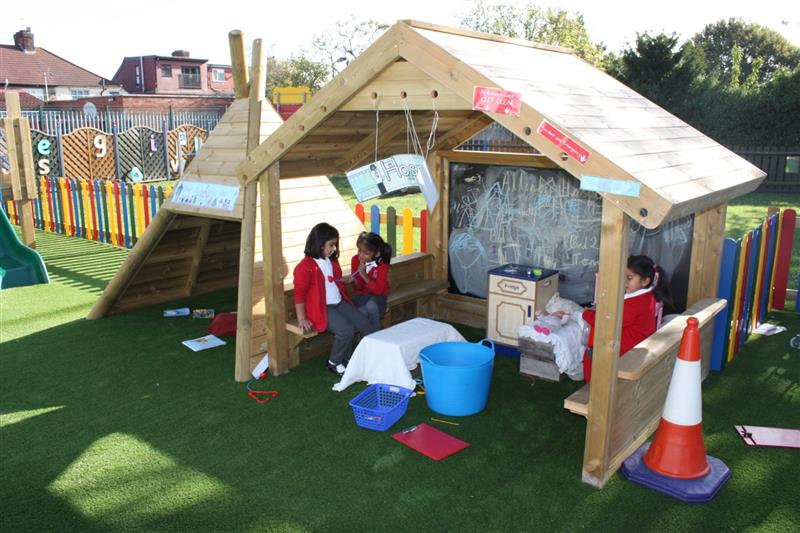 Using nursery rhymes and musical instruments can be an exciting, social experience for pupils. Children may be able to respond to the beat of the rhyme by walking or hitting an instrument.

Using the instrument may encourage some children to become more vocal and pupils can learn specific vocabulary such as ‘loud, soft, beat and rhythm.’ Learners may create new words to familiar rhymes and explore making appropriate sound effects to bring their rhymes to life!

Songs with actions help children’s physical skills such as balance, co-ordination and strength.

When performing the rhyme ‘Heads, Shoulders, Knees and Toes,’ children are using arm and shoulder muscles. As they tip forwards to touch knees and toes, they use their core strength and balance.

Children develop proprioception and their vestibular sense which is important for learning how to control large body movements.

Early years practitioners are skilled at making rhymes and chants part of everyday routines which may help some children who find comfort in routine. ‘Here we go round the Mulberry Bush,’ can be easily adapted: ‘this is the way we wash our hands, tidy up, get our coats etc. 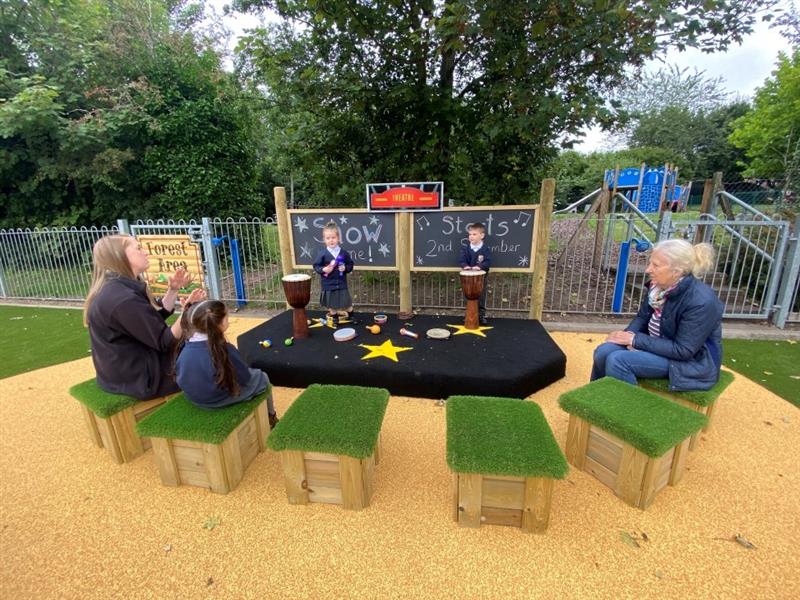 Top Tips for including Nursery Rhymes in your Setting

When teaching nursery rhymes to children it is helpful to sing slowly and clearly as children need to be able to hear the words and melody to join in. A bag containing props such as finger puppets, spoons with characters drawn on and toys can be useful to prompt children when singing.

Storytelling Areas can include illustrated copies of nursery rhyme books alongside recordings of rhymes which children can choose listen to. 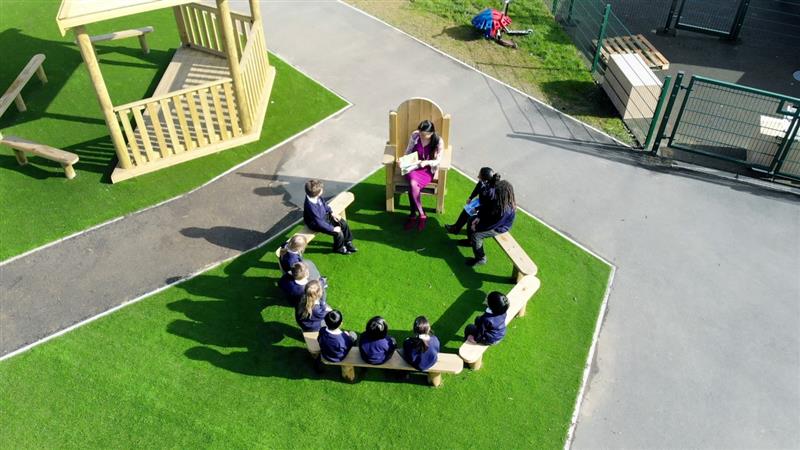 A box of props and costumes may help children to take on a new role when acting out a rhyme and devising their own actions.

At the writing table children can write notices and letters to the Owl and the Pussycat and the grand old Duke of York.

They may produce storyboards of their own versions of the rhyme or create a dialogue/play between the characters.

Outside in the school grounds children can use Den Making Posts to create homes for Little Bo- Peep’s sheep, they may build a character at the construction table and practise filling and lifting the ‘little teapot,’ at the water table. 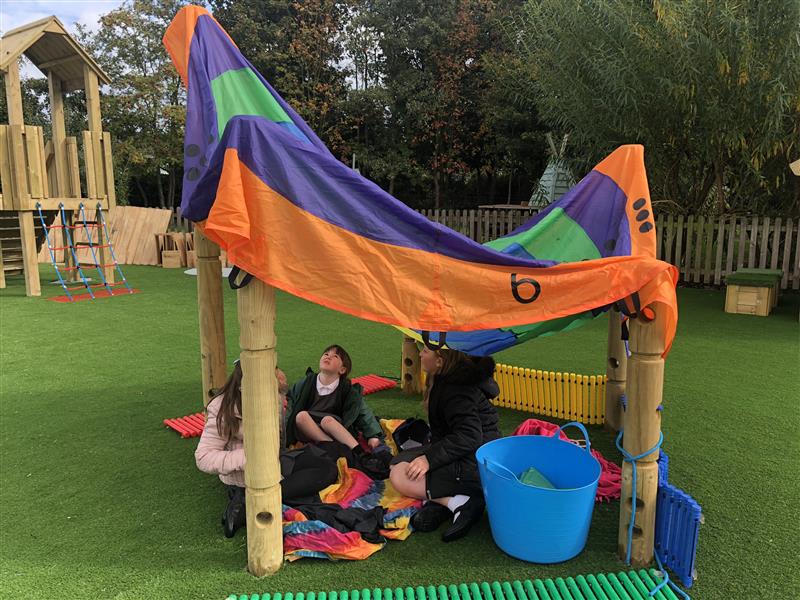 It would be lovely to really celebrate nursery rhymes at the end of World Nursery Rhyme Week with a special event. You could have a class picnic where children share, dress up and perform their favourite rhymes.

Older children could perform rhymes and plays to younger classes or a coffee morning could be held for grandparents and pupils to share favourite rhymes. 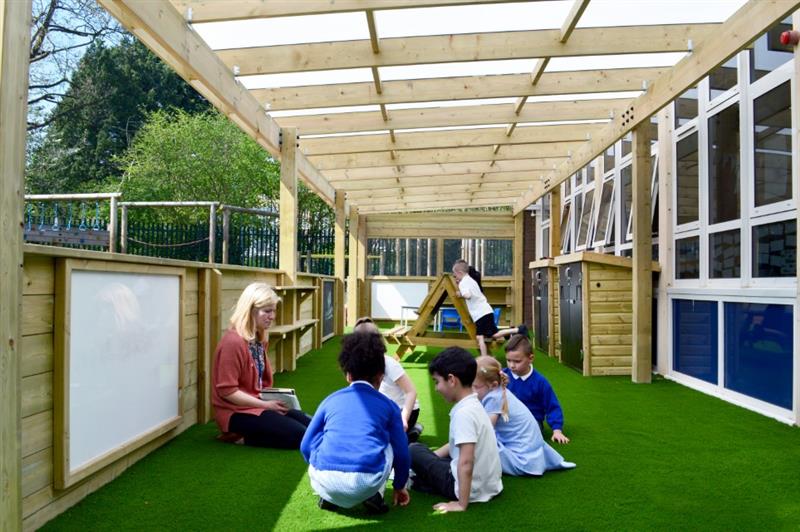 They underpin foundations in understanding language patterns, mathematics and music.

Adults who bounce babies up and down on knees, creating silly games and actions to accompany rhymes are providing the perfect introduction to early literacy skills.

Nursery rhymes are a rich resource readily available at our fingertips. The early years foundation stage framework states that pupils should enjoy rhymes, poems and songs together and that we should read rhymes and poems frequently to children so that they become comfortable using a rich range of vocabulary and language structures. 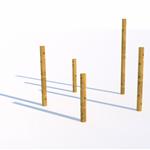 Singing a nursery rhyme together can be a real moment of joy and active learning in the school day.

Listening to different nursery rhymes provides children with the foundations of reading and writing so let’s encourage some spontaneous singing during World Nursery Rhyme Week and beyond! 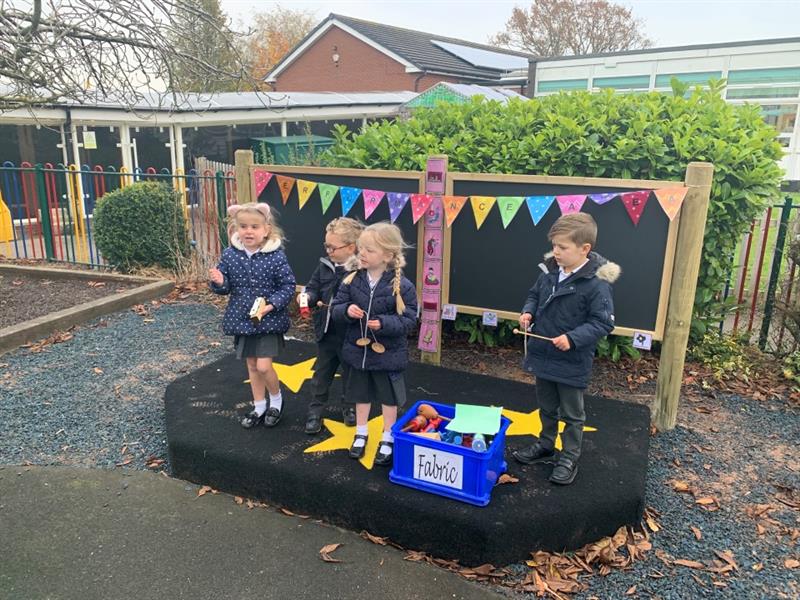 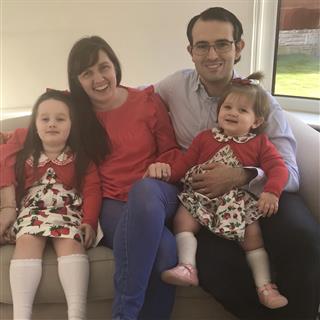 Step into Christmas with Pentagon Play!

Christmas Lesson Plans Just For You This Season!