It was all sunshine when we visited the completed project at the Sir Donald Bailey Academy in Newark, Nottingham and there were smiles all around from the pupils.

An abundance of fun awaited them in their playground, and they couldn’t wait to get involved.

Outdoor Learning Consultant, Daniel Young, worked alongside the team to design two great areas for the pupils where their learning could continue through play even during their breaktimes.

Dan advised them on the installation of two Interactive Fence Panels on Wheels.

The panels allow for the separation of the playground into two, which can then be removed if the classes wish to play together.

The advantage of these panels being on wheels means that they can be moved freely to change the design of the area and create new and exciting spaces. 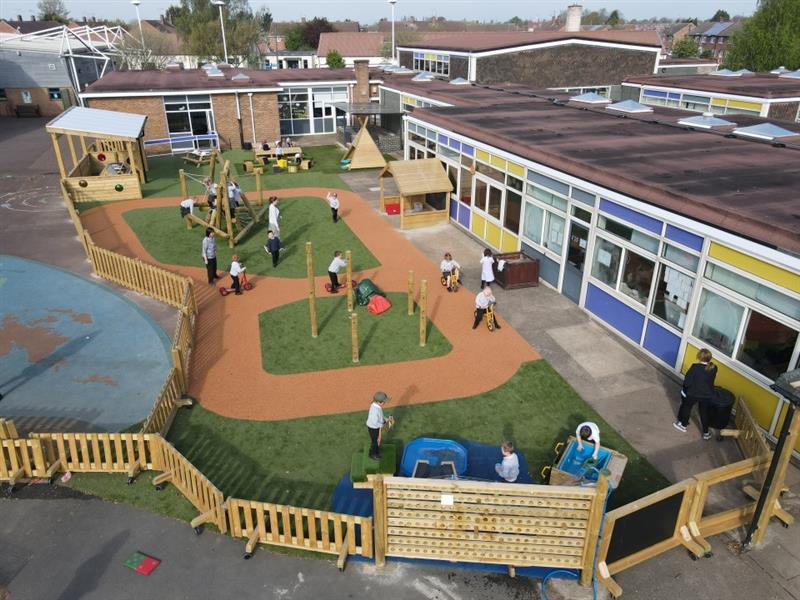 The Foundation Stage One Zone:

The first of the two zones was designed and created for the Foundation Stage pupils of this school and they absolutely loved it.

Their first point of call was their brand new Get Set, Go! Blocks- The Mendips Set. The pupils supported their peers as they made their way around, developing their communication skills as they instructed each other along the route.

Their ability to make their way across the track in whatever way they chose, whether that was running, jumping, or crawling, gave the pupils great freedom in customising their play. Giving pupils this independence early on is great for them as they grow up understanding their ability to make decisions for themselves.

The roadway was also a popular choice for play with pupils as they were quick to grab their trikes and scooters and take them to the lanes. They couldn’t wait to test their speed against their classmates and see who would be the first to complete the circuit! 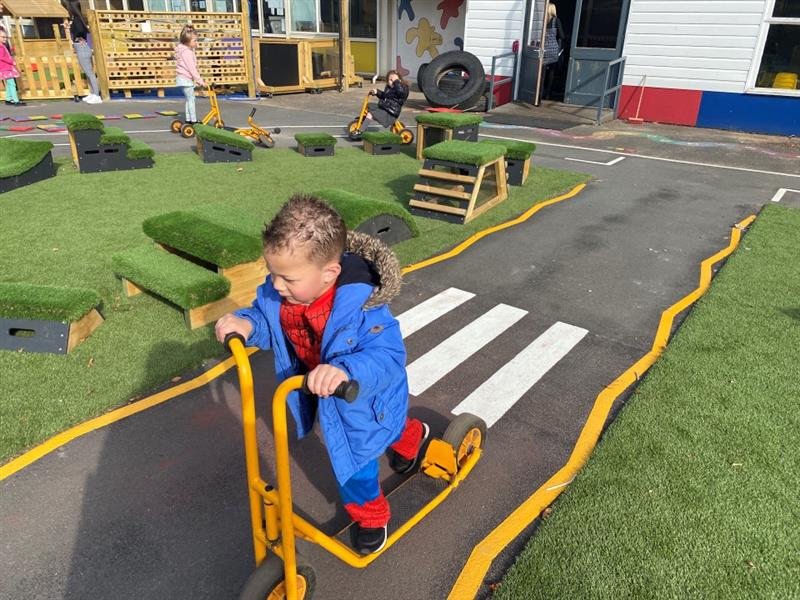 Or, if the pupils would prefer some quiet time, they have plenty of places to retreat to with their new Giant Playhouse and the WigWam!

Pupils now have these amazing well-being spaces to enjoy in between lessons where they can develop their communication skills with their teachers and peers.

There are plenty of zones for messy play too with separate play spaces created to divide the area into different activities.

Pupils can venture into the mud zone if they wish, mixing up some mud pies for their friends and baking them in the ultra-realistic Mud Kitchen. 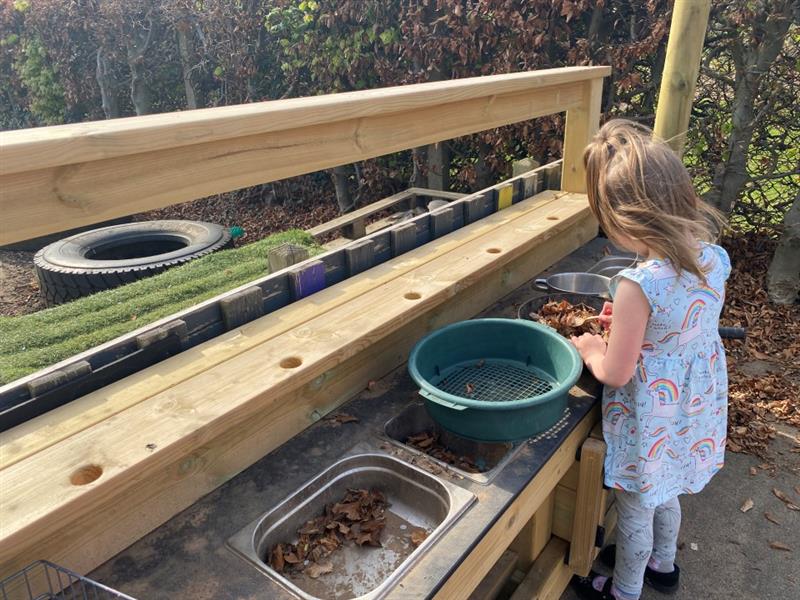 The pupils of Sir Donald Bailey were also working on their upper arm strength, using the Rope and Pulley Materials Mover to transfer their mud pie ingredients from the Mud Box to the kitchen!

This gave the children an extra element for their storytelling as well as encouraging them to develop their fine motor skills as they transferred the mud. 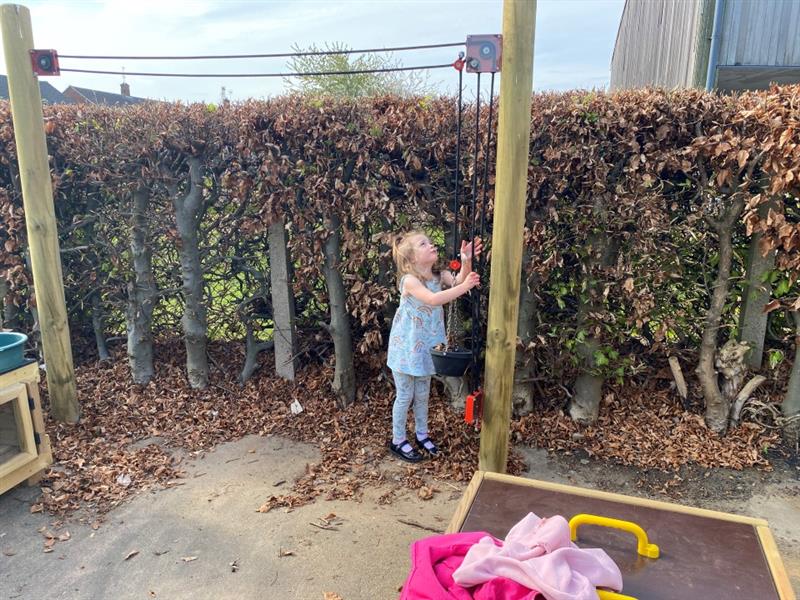 Another zone of this play space is dedicated specifically to nature play, creating a space where pupils can interact with the natural world in the Bug Hotel.

Pentagon used Trellis Fencing to separate this area from the main play zone, giving pupils a multi-faceted area for play.

This space will also be great for science lessons where teachers can take the pupils outdoors to learn about the weather, plants and more!

Learning can also be taken outdoors throughout the year, under the shelter of 5m Hexagonal Gazebo.

Pupils can perch on the Artificial Grass Topped Seats or the Freestanding Story-telling Chair as they listen to their teacher.

Outdoor Classroom Spaces like this can be hugely beneficial to pupils and always offer a great excuse to get outdoors for some fresh air.

Speaking of Outdoor Classrooms, it was really important for the Foundation Stage Two area to have access to an open-sided classroom also!

They selected a bespoke 6m x 3m Timber Canopy as their class is slightly larger than Foundation Stage One and they wanted to have plenty of room for their pupils in this area. 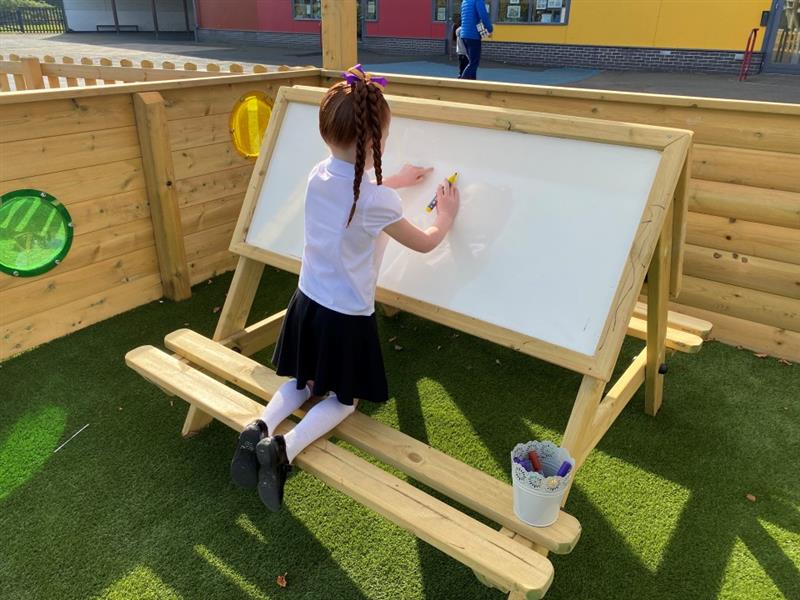 They filled this space with an Easel and some Picnic Table with Chalkboard Tops, much to their pupils delight, giving them a space to practice their drawing skills and bloom into the budding artists they are. 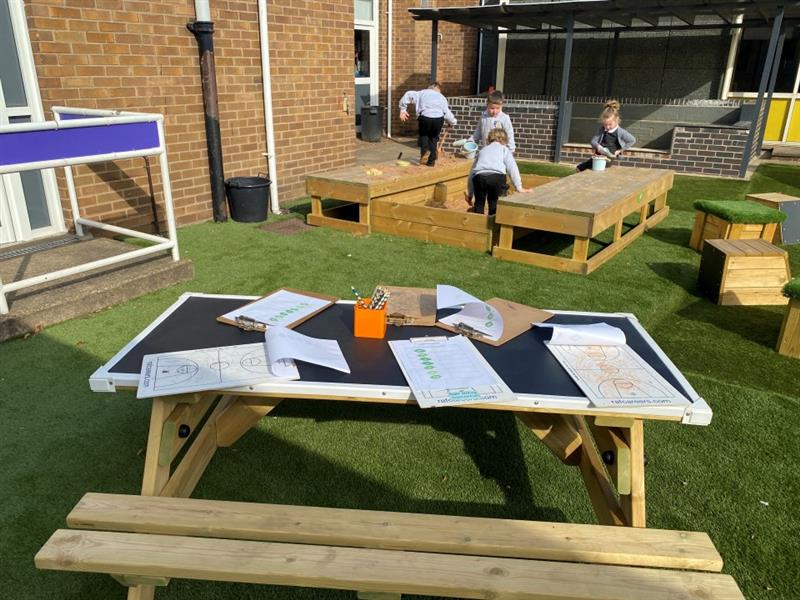 Pupils can also do this within the Giant Playhouse with Chalkboard that this class also has. This sheltered play space is great for pupils to seek shelter on a rainy day whilst practising their writing skills in chalk.

If that’s not what the children of Donald Bailey feel like doing during their break time, there are no worries as there are plenty of other zones for them to play in. 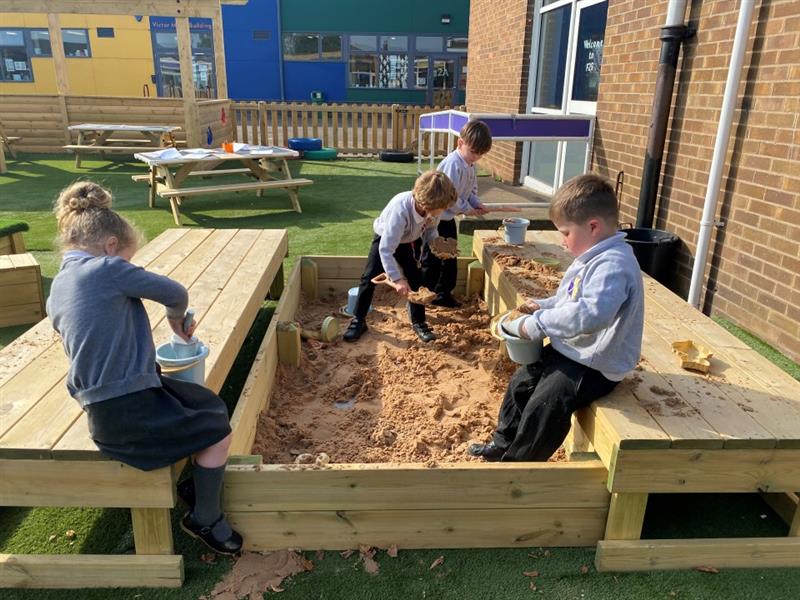 Pupils can build their very own lifelike castles in the Covered SandBox, which is definitely a class favourite!

Or, pupils can have the full beach experience, mixing both sand and water play with the Water Wall with the Water Play Package at the opposite end of this play area! 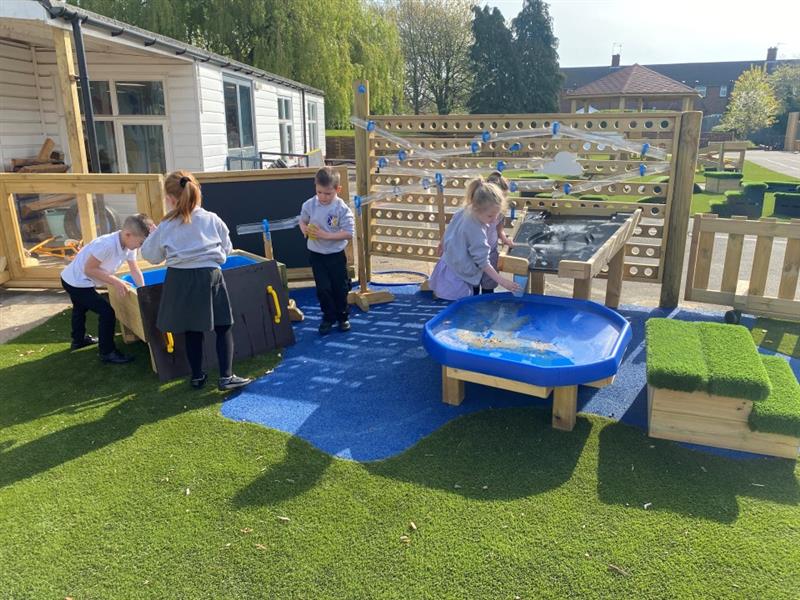 This zone also features a mix of Artificial Grass Topped Seats and Pentagon Play’s new Drum Seats, where pupils can make a beautiful melody with their classmates and learn all about rhythm and pitch. 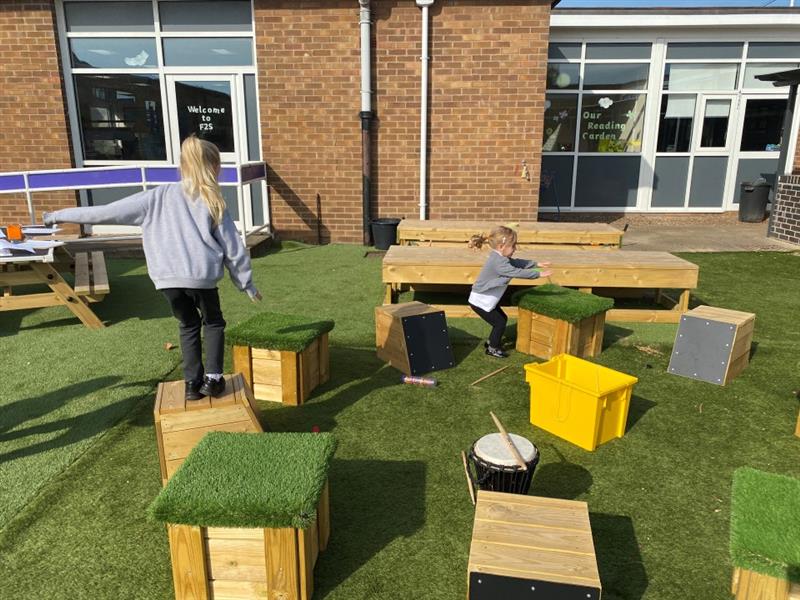 Just to cover all areas, Sir Donald Bailey Academy also added a Harter Fell Climber to this area, giving pupils the opportunity to develop their climbing skills on facilities that they’ve never had before.

Pupils will be able to build their gross motor skills as well as improve their upper arm strength using the ropes to pull themselves along. 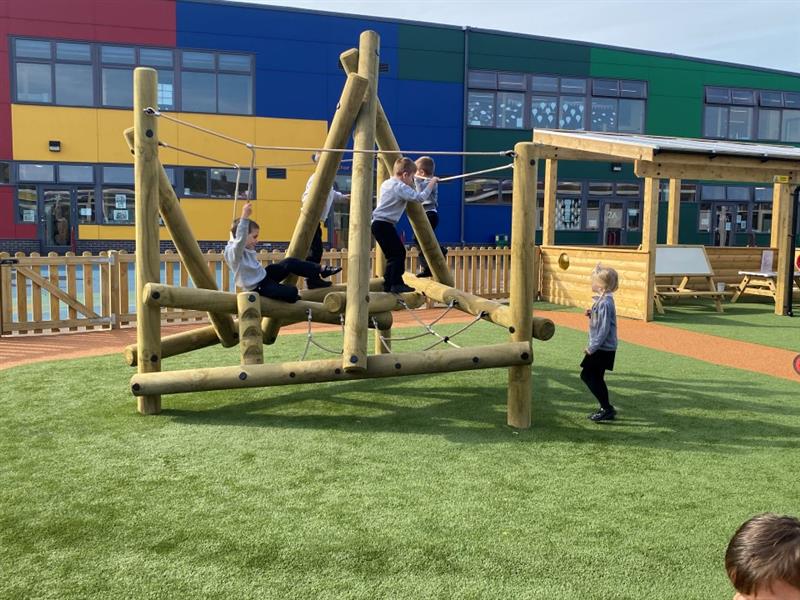 This remodel was really full of everything that the pupils of Sir Donald Bailey Academy could ask for and Dan and the rest of the Pentagon Team have absolutely loved working on this project!

Contact Us Today to discuss remodelling your very own Foundation Stage area and we’ll be happy to help!

If you would like to see more of our EYFS Range, then take a peek now and find something to suit your pupils today.